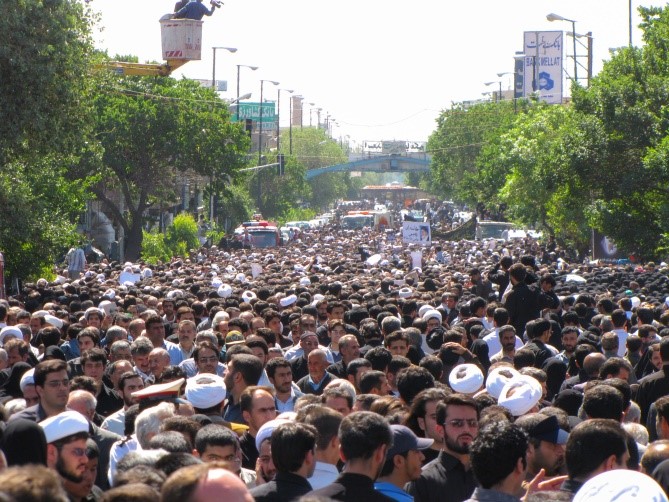 The New Year in Iran has not been a particularly happy one. Extensive unrest at government corruption and practice has escalated into a full-blown protest movement, the largest in Iran since 2009 and one which could – given time, publicity and momentum – threaten the social order of the Revolutionary Guard like nothing in recent memory. Will this moment be a sea change for Iran or will the ‘Isfahan Spring’ be nothing more than a brief flowering?

The violence in 2009 was explicitly directed against newly re-elected President Ahmadinejad and his particular rule. This time, grievances are broader. The protests started off in opposition to the price of food and the worsening domestic economic situation but soon widened to encompass the wider political situation and the seeming intransigence of the leadership to solve the crises at home before committing to entanglement in problems abroad. Threats of a crackdown, and police response so far (in which 22 have died) have not been enough to quell the protests rising.

One cannot underestimate the potential for this to be the most seismic event in Iran in a generation. Bigger than the election of Rouhani and his talk of a ‘new direction’, bigger than the ongoing sanctions drama played out each month – bigger even than the nuclear question. Rouhani has promised much and delivered little. The sanctions war remains in a state of deep-freeze despite Donald Trump’s best efforts otherwise. And the issue of nuclear supremacy can never be fully answered while the above two problems remain (although a full discussion of this issue would take a far longer piece).

Domestic unrest, however – this is one of the regime’s (and indeed any autocracy’s) biggest fears. Any authoritarian regime relies on the suppression of the domestic majority in order to see their power untrammeled and in the case of the Revolutionary Guard, there is a vast amount of power for the unwashed masses to trammel. This is how the Arab Spring started; it is how the governments of Tunisia, Egypt and Yemen were toppled. It may yet be the ending in Iran – but such is the tripartite nature of the powerbrokers, even this might not be enough.

Hassan Rouhani will certainly be watching on with no small measure of concern. While the protests have not singled him out for personal criticism (yet), their discontent could yet be used as a smokescreen by the Supreme Leader and his coterie for the removal of Rouhani. That the President and the Ayatollah do not work together in perfect harmony is well known and, dependent on how serious the violence becomes and what specific demands may be made, he may be held up (and accepted) as an acceptable scapegoat to appease the protestors.

However, this time, a sacrificial lamb may not suffice, particularly when so much power and influence would remain concentrated in the hands of the Supreme Leader and the Revolutionary Guard. That the anger on the streets has been directed against the general concepts of corruption, the failing economy and the living standards within Iran rather than against any particular individuals indicates that this is a fight for not just Iran’s present, but its future.

This then leaves Iran in a curious state going into 2018. By the end of January, President Trump must decide whether or not to re-introduce the sanctions, but if the home front remains restless this issue could get pushed down the agenda. Not quite that a house divided cannot stand, but a house where the tenants on the ground floor are not quietly accepting the loud music being played by those above cannot continue ‘as is’. One can expect the crackdowns to increase in scope and intensity the longer the unrest continues. It is unlikely that serious concessions will be made. So whether this is enough to trigger a wave of ‘sedition’ big enough to enforce meaningful change could be a bigger hot button story than anything else in store for Iran in 2018.